An actress, Melanie Kannokada typically starts her day by meditating, followed by tea and then breakfast. Then she takes some time to focus on her schedule which is usually a mix of meetings, auditions, filming, classes or rehearsals, and writing.

But her days weren’t always this way. Before becoming an actress, Melanie worked as a consultant for McKinsey & Co. in New York City and before that she graduated with a degree in Mechanical Engineering from Stanford.

So how did the transition from mechanical engineer to consultant to actress, happen? We interviewed Melanie to find out.

While Melanie has always been interested in being an actress. it was neither encouraged or respected where she grew up, so she suppressed those ambitions and became a performer in different ways. She danced, did martial arts, played the piano and wrote and performed sketch comedy. 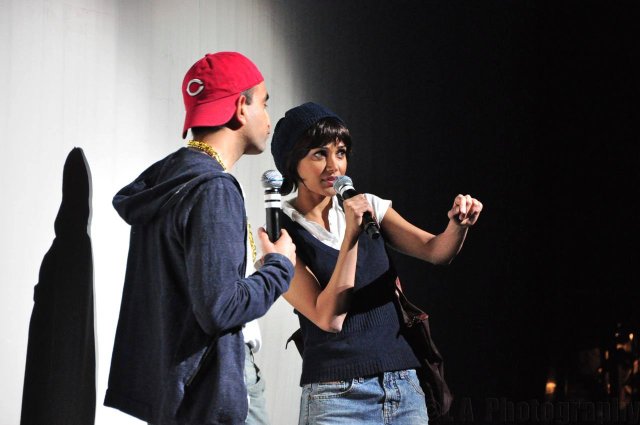 He first exposure to the entertainment industry didn’t come until just after college, when at the age of 20, she won the Miss India America contest. The parallel of Miss America for girls of Indian descent residing in the US, Melanie was encouraged to participate by a mentor of hers at Stanford.  She was so shy about the the idea of entering the pageant that she didn’t tell anyone about it, even her parents, until 2 weeks before the event!

The contest got her started in modeling and even as she worked as a consultant she continued to model part-time and take acting classes. She loved the acting classes, as she had always known she would, and soon she was moonlighting as an actress. Approached by several reputable agents, it still took some time for Melanie to take the leap into acting as a full time career.

Melanie at the Stanford Oval

She has a website to promote herself as an actress but she also created her about.me page because she liked that she could have one clean page to display all her social media links. She also uses it in her email signature and likes how easy it is “to get a sense of someone within an instance of coming across their page.” Which has likely helped her in her search for photographers and makeup artists to help her with the photoshoots she produces from time to time and her upcoming wedding. In the middle of planning, she’s been scouting about.me for talented graphic designers, videographers and more who can help her fulfill her artistic vision for her wedding.

So while her days can still be hectic, Melanie is very happy that she now gets “to play make-believe for a living”. She recently wrapped filming for the new HBO comedy series, The Brink, where she plays a supporting role opposite Jack Black and Aasif Mandvi. Be sure to tune in to see her in Summer 2015 when the series premieres. In the meantime, you can check out her film reel below and to see if you’ve spotted her in anything yet as you’re sure to in the future.