A fashion writer, Roberto Neri has been asked many times why he still chooses to live in Rimini, 330 kilometers from Milan, Italy’s fashion capital. His response, in Italian above, describes his attachment to the land where he was born and has always lived as though it were part of his very DNA.

With a history that stretches back to its founding by the Romans in 268 B.C., Rimini is full of art, culture, and friendly people. The famous piadina, a thin flat bread which is folded and filled with all kinds of delicious foods, originates from the city as does Federico Fellini.  One of Italy’s most famous filmmakers, he was born and raised in Rimini and later wrote about the city in an essay which he turned into the Oscar-winning film, Amarcord. 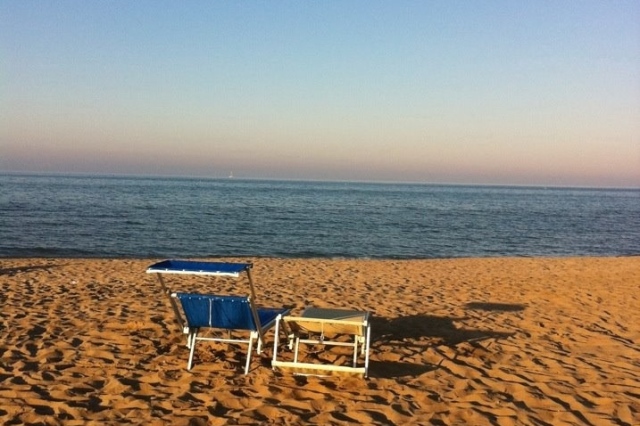 The beach in Rimini, Italy.

But beyond that, the city is just beautiful. Located on the Adriatic Sea, there is the constant smell of sea salt in the air, beautiful sunsets to witness, sun and sand. And in his beautiful descriptions of the city, you can visualize the sense of calm which the city brings to him and truly explains Roberto’s desire to stay there. He says “per scrivere cose belle occorre stare là, dove il tuo cuore trova riposo.”, “to write beautiful things you have to be where your heart finds rest.”

From his beautiful prose, and more than 10 years of experience in the communication sector, it’s clear that Rimini is where Roberto does his best work as a writer. Though he’s always had the sense, even from a young age, that he would work in fashion, he has only started to concentrate on it in the last 3 or 4 years. He began by creating a fashion blog, working with the top Italian fashion magazines online and really establishing an idea of what fashion is to him.

To Roberto, “fashion is a grand hymn to “beauty”, the same one sung by artists and poets throughout the course of history,” available to anyone, in spite of personal or economic conditions if they have the right tools. In his writings, he tries to go beyond the superficiality that the fashion world is often filled with and critique pieces and judge them by more than their aesthetic merit. He loves to show off collections or pieces then explain what makes them so beautiful, show what’s behind the making of the piece, and what the cultural and historical influences are behind it. With his about.me page, he hopes to continue doing this, demonstrating his own vision of fashion and generating in others the curiosity and desire to read and understand what fashion really means.

So far, it’s working. We immediately wanted to learn more about Roberto after seeing his background photo showing off his unique personal style, which he describes as a mix between classic menswear pieces and metropolitan style. Given that, when we asked him what his favorite items of clothing were, he didn’t really want to answer but revealed that has definitely lost track of the number of ties and shoes he has. For him and for many, this attention to detail is important because, as Roberto says, “il modo con cui ci presentiamo al mondo, è il nostro primo biglietto da visito” or “the way we present ourselves to the world is our first business card.”

One response to A fashion writer in Rimini: Roberto Neri